Thank you for your business!You should be receiving an order confirmation from Paypal shortly.Exit Shopping Cart

The Relationship between the Black Man and Black Woman 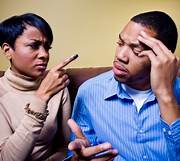 There is no beauty but in relationships.

Added to this was their inability to protect their children from being slaughtered, beaten and sold has wounded the spirit of the black men and women. Guilt, blame, disloyalty, distrust, shame along with many other negative emotions put a wedge between them. However, there is liberation from this - there must be emancipation from mental slavery and racism.

I have interviewed many persons and I am seeing that their is a profound distrust, even hatred between black men and black women. it has been nursed along not only by racism, but also by an almost deliberate ignorance on the part of black men and women about the true spiritual essence and beauty in having good relationships between themselves.

We need to help our children and bring them back from the erroneous path that they are taking which can only lead to their destruction. THIS IS THE TIME FOR RESTORATION - NOW, NOW, NOW

Oops, you forgot something.

The words you entered did not match the given text. Please try again.